5 Artists You Should Know

Catherine Opie nurses her one year old son in this self-portrait, which combines the violence of self-mutilation with the tenderness of domesticity. The raised skin visible on Opie’s chest spell out the word “pervert” and evinces the artist’s involvement in the sadomasochistic community in San Francisco—­her photos of which she is best known for. But whether portraits of S-and-M aficionados or family pictures, Opie’s oeuvre is united by a common theme of community and redefining what that might look like.

The art that David Wojnarowicz (1954-1992) produced in the last years of his life exemplify the phrase “the personal is political.” Wojnarowicz was a key figure in the East Village arts scene of the 1970s, documenting the outsider experience in photography, writing and mixed media. When he was diagnosed with HIV in 1987, his art became indistinguishable from his AIDS activism. The self-portrait below, in which the artist is buried up to his teeth, was taken two years before Wojnarowicz’s death. It expresses the despondent terror he felt in the face of an attenuated mortality.

Japanese photographer Yasumasa Morimura is known for inserting himself into the famous paintings of Goya, Rembrant and others. In the series titled “An Inner Dialogue with Frida Kahlo” (2001), Morimura simulates the self-portraiture of Frida Kahlo, in which Morimura poses as Kahlo’s stand in. The photo below is both an homage to the Mexican painter as well as a critique on cultural appropriation and the commoditization of culture. See the full series here. 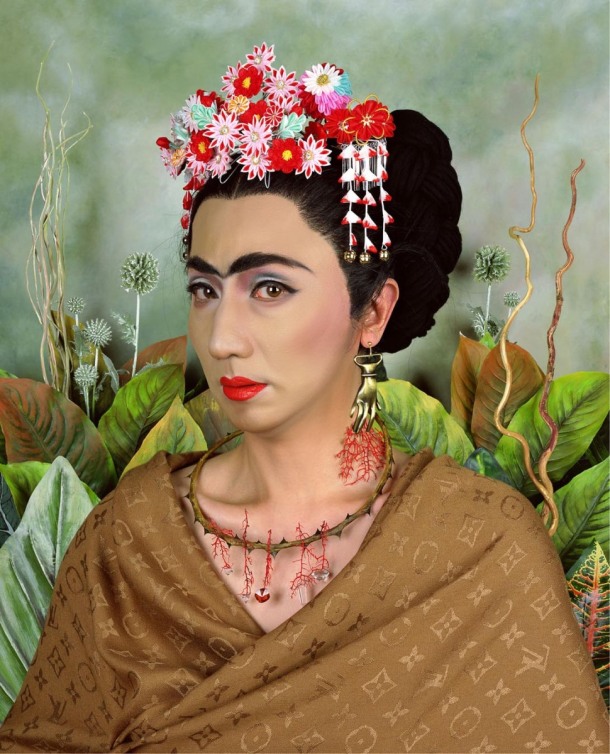 Similar to Opie, Robert Mapplethorpe (1946-1989) is remembered for his explicit images featuring members of New York’s gay S-and-M scene. Mapplethorpe printed this self-portrait of him penetrating his ass with the handle of a whip on invitation cards to his gallery opening at 80 Langton Street on March 21, 1978. This self-portrait along with Mapplethorpe’s other hardcore photographs documented a form of consensual sexuality that was not publicly acknowledged at the time. 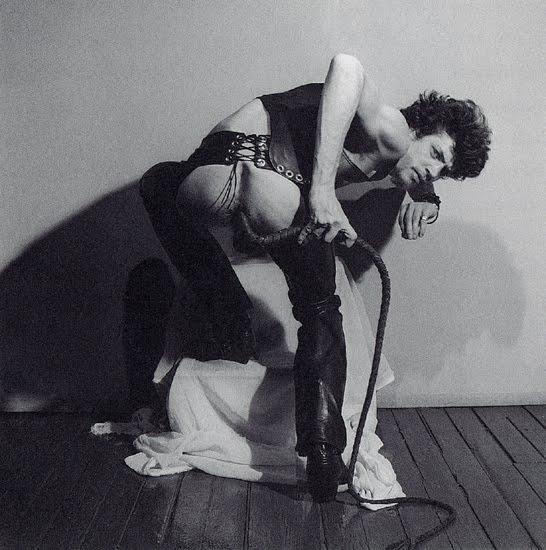 Surrealist artist Claude Cahun (1894-1954) interrogated the bourgeois norms of accepted sexuality in 1920s and 1930s Paris in her self-portraiture, pushing the envelope far beyond what her male, mostly heterosexual, colleagues were willing to. Here, Cahun, costumed as a petite male weightlifter balancing a barbell on his lap, gazes coquettishly into the camera. The spit curls, lipstick hearts on his two cheeks, and the phrase “I am in training, don’t kiss me” written across his chest highlight aspects of femininity in the trope of the makeup-clad circus strongman.